"In Reflection: A Frog and his Man" - Kermit and Jim

One of the most famous photos of Kermit the Frog and Jim Henson being used in official capacities such as interviews with Kermit the Frog, being used in fan-made memorials to Jim Henson, and even people trying to sell it on eBay,  floating around the internet for several years, isn't even official. We've even had a guy search for this photo for three months before he located me about it. But, where did this image come from?  Where did it begin?  Is it something the Jim Henson Company made, or even Disney's Muppets after their purchase?  A Photoshopped image?

Nope.  It's not an official company image, and it wasn't staged by the Henson Company, Sesame Workshop, or Disney; but, it was made by fans who wanted viewers to share in our emotional connection to the frog and his man.

More recently than not, folks who know us recognize when this photograph pops up on the internet.  The "us" I mention is Lin Workman and myself, including the Wades who helped with a TON of photos we took that weekend.  We took this 'famous' photo on September 1, 2007, at the Jim Henson Delta Boyhood Museum in Leland, MS.  Which picture, you ask?  This one:

﻿
See, in 2007, Master Replicas (MR) was sending their Kermit the Frog Photo Prop Collectible around the country on a promotional tour.  It was a pretty popular program hitting probably 10 - 15 cities.  The process was that you had to apply and tell why Kermit would want to visit your city, and they would ship the Kermit to you in a suitcase in which you would put a few collectibles from your town and then you would send him on to the next town.  Each town would be given a gallery on their website with a poll running for the "popular vote" in their forums.

﻿
In order to win the opportunity to have Kermit come to Memphis, TN, I wrote Master Replicas, "...and we can take him home again, to Deer Creek where Jim Henson used to play in Leland, MS, and to visit the Jim Henson Museum there."  Not long after my e-mail was sent I was told we'd be playing!

Lin Workman and I took MR Kermit all over Memphis (the Zoo, Botanical Gardens, Beale Street, to meet Blues singer Di Anne Price, out to eat BBQ, and more).


On September 1, 2007, we went down to Leland, MS, and to the Jim Henson Delta Boyhood Museum with Martheus and Janet Wade who assisted in a lot of the photographs there.  As we walked by the photograph of Jim Henson on the wall, I asked Lin if we could take a photo of the Kermit prop replica in front of it, he says 'Sure,' and I dropped down to the floor, posed Kermit, and held him up while Lin took the photo.  (Another that has never been published of Kermit hugging the photo as best he can, published here for the first time.) 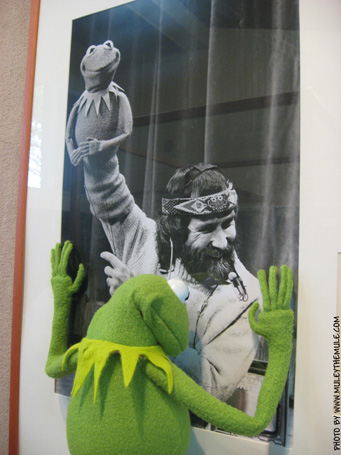 After the Leland trip, we submitted the photos to Master Replicas which went up on their website (since the company closed, the website and photos are removed).  This photo was an immediate hit with everyone who feels and understands that sentimentality we hardcore fans feel when we think of Jim Henson.  Always a celebration of his life, of the lessons he taught us about people, animals, and environment, and a bittersweet emotion recognizing the loss we feel by his not being here now, and yet having left a better world by having been here at all!

Now that you're at this part of the story, go back and look at the image up top again and think like a Muppets and Jim Henson fan.  Do you get it?  Do you feel what we, as fans, felt about the image?

Video photo-montage of the trips can be seen below, both were published to YouTube on September 10, 2007.

The image was taken in a moment as we were snapping shots all over the museum, but after we took this shot we looked at it and all the emotion of how we care about Kermit and his creator was in it:  A reflection on good times, a reflection on good friends; inspiration and admiration, the appreciation of someone--a longing to see a loved one who has gone on before us.  Influence of creativity, happiness and a desire to make the world a better place.  The photo prop looking at a photo of Kermit emoting the same smile as his creator who stands below him, and the smiles both have given to us and the world.  This is only a little of what the photo sums up for us, but you get the meaning and the idea of it.

And since then, our photo has shown up honorably (keeping our tags in place on the image) on all sorts of tribute websites (which is fine); but, then, there are those 'people' out there who have taken our image and desecrated it which is NOT fine.  There are people out there who have 'swiped' the image and removed Lin and my tags from it and claimed it as their own, even showing up on ebay for sale by a company who claims to be honorable by offering an "official photograph" of a Kermit collectible...a photo that the guy doesn't even own rights to sell.

﻿
It has shown up in movie reviews, and even during an official interview with Kermit the Frog regarding the 2011 movie The Muppets in Australia on their version of A Current Affair.

None of us who were there have ever offered up a copy of the image either free or for sale, except to those who are connected with Jim Henson.  We never have, nor will.  However, a "reputable" collector company said he owned it and tried to sell it on eBay, other groups have used it to promote their own agendas (some desecrating the meaning and sentimentality by creating crude memes) - none of which we have ever given permission to do.  It not only desecrates our love for the character and the man who created him, but also is a desecration to the appreciation felt by every fan around the world.

Knowing what it means to us, and hopefully to you, if found being used around the internet, please post a comment linking back to this story.  Copy and paste this line, please:
http://muleycomix.blogspot.com/2012/02/in-reflection-frog-and-his-man.html

I hope that you--whoever is reading this--will help us keep folks from further harming the intent of the image and will let us know if it ever is taken without honor again.

9/4/2013: Visit Paul Williams' blog "The Elegance of Kindness" by clicking here!  He had some really nice things to say about the photo:


You and Lin captured the true feelings of millions of Muppet, Kermit and Jim Henson fans with your amazing photo.

October 2013 Update: An "official copy" of the Jim and Kermit photo was dedicated to the Jim Henson Delta Boyhood Museum during FrogFest.  You can see photos and learn more by clicking here.

Updated 8/3/2019 to share that the photo was mentioned by Adam Kreutinger and Cameron Garrity during their "Puppet Tears Podcast" while visiting with Hasbro's Bill Rawley.  Click the image here to listen. 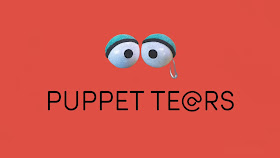 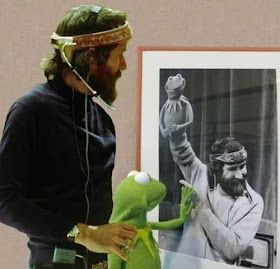 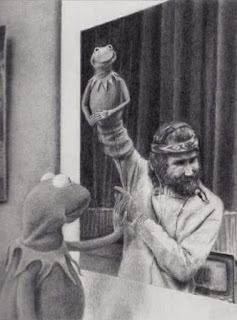 Here's an article that gives credit where credit is due:
http://justaratinacage.com/kermit-the-frog-remembers/
MuleyTheMule.com at 9:19 PM
Share